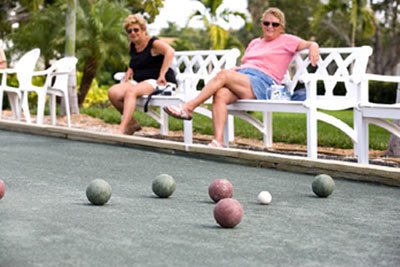 Bocce… Almost the Most Popular Sport in the World

Did you know the early Romans were among the first to play a game resembling what we know as bocce today? In early times they used coconuts brought back from Africa and later used hard olive wood to carve out bocce balls.

Beginning with Emperor Augustus, bocce became the sport of statesman and rulers. From the early Greek physician Hippocrates to the great Italian Renaissance man Galileo, the early participants have noted that the game’s athleticism and spirit of competition rejuvenates the body.

Our bocce courts are conveniently located just steps away from the fitness center. So come out and enjoy the world’s oldest sport, a sport known to revive the body and mind. And, one of the most popular games in the world.

Rules of the Game 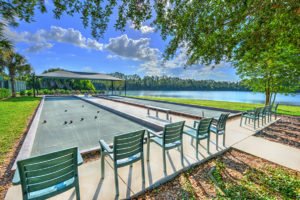 The small target ball, the pallino, is then tossed from one end and must land at least 1 ¼ meters (5 feet) beyond center. Each player then aims to throw his bowl, which is heavier than the pallino, as close as possible to the target. This is usually done after a walk-up of several steps within the foul area.

The throw is complicated by variations on the way the target is approached, according to regional practices. Competitors comprise two players with two shots each or teams of three to six people using fours shots each. If a bowl displaces others already in place it is disqualified. The winner of a game is the first to score 9-15 points in pairs, or 9-18 in a team competition.