That’s totally fair. We at ICI Homes get the skepticism if you haven’t heard of bocce ball or haven’t seen it played. But we promise it’s worth investigating. 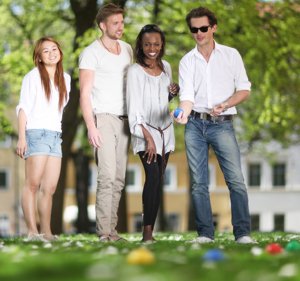 Bocce is a bowling game that dates back to the ancient Roman empire. Centuries later, it has enjoyed a renaissance because it’s (A) fun, (B) not complicated in format or equipment, and (C) can be played one-on-one or with teams.

At Plantation Bay Golf and Country Club in Ormond Beach, Florida, the bocce courts are popular gathering places for neighbors and friends who like to duel each other in a different arena. Bocce is a game that proceeds at a relaxed pace. A cold bottle of water, beer or snacks can add to the occasion.

How to play bocce

If you’re not familiar, picture a lane in a bowling alley, but one outdoors, paved with sand or finely crushed gravel. Its width and length — 60 feet long by eight feet wide — closely mimics that of a conventional indoor bowling alley. The bocce playing surface usually is called a court, but you’ll also hear it called an alley or a rink.

Bocce balls are small compared to bowling balls, and fit in an adult’s hand (and most kids’). The ancients are known to have carved theirs out of coconuts and olive wood. Today, plastic and metal balls are common.

A smaller target ball called a jack or “pallino,” in Italian, is tossed into the bocce court and must land at least five feet beyond the center. Players then take turns bowling their balls toward it. Players — or teams — receive points for how close each ball comes to the “pallino.”

But this isn’t indoor bowling where speed and force are prized. A deft touch and technique are required, which makes it a great game for all ages. Mind your form, however. If you bowl a bocce ball that strikes or displaces previously bowled balls, your bowl is disqualified.

You’ll win a bocce match if you’re the first player to score 9-15 points as an individual, or 9-18 points in team competition.

Lest your eyes glaze over, we’ll stop there. But suffice to say that a little topspin and a precise aim can score a lot of bocce points. And what’s better than bragging rights?

You can play more than bocce

The bocce courts are located at Plantation Bay’s wellness complex, which can leave you happily exhausted. It’s home to two pools at the pool pavilion, a full-service spa and a full-service fitness center.

If you need a break from bocce, whack some tennis balls on one of 10 tennis courts. Work on your layup at the outdoor basketball court. Or, master another game with an unusual name — pickleball — on one of those four courts.

And we haven’t even discussed the 45 holes of golf and two full-service clubhouses!

Ready to step up your house-hunting game? ICI Homes can help. Begin here.