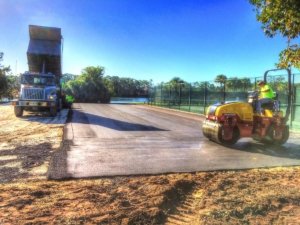 Club members of Plantation Bay will soon have a new activity available to enjoy. In addition to the golf, tennis and bocce that they are used to, club members are now able to participate in one of the fastest growing sports in America: Pickleball!

Four courts are currently under construction with a completion date set for mid-November. Club members will be offered training clinics in the near future.

You’ve probably heard the term “pickleball,” but you might not know exactly what that is.

Don’t let that intimidate you, though. Pickleball offers a fun and exciting experience for players of any skill range or athletic ability. As long as you are playing with players of approximately equal skill, the game can be enjoyed by pretty much anyone.

Pickleball is a combination of tennis, badminton, and ping pong that is played on a miniature court with a wiffle ball.

The game is played on a court that has the same dimensions as a doubles badminton court, which is about one third the size of a regular tennis court. A net that is 34 inches high, which is two inches shorter than a standard tennis net, separates the court. The game is played with hard paddles and a small wiffle ball that travels about one third the speed of a tennis ball.

Gameplay involves diagonal underhand serves from behind the baseline into the opposing side of the court. Play is similar to tennis, badminton, or ping pong in that the ball is volleyed back and forth until one team faults by either not returning the ball or returning it out of bounds. Points can only be scored by the serving team, and a team loses the serve after two faults.

Check out this segment on Pickleball from the CBS Early Show:

Where Did Pickleball Come From?

The game of pickleball was invented by Joel Pritchard, Bill Bell, and Barney McCallum. After an afternoon of golfing, they were attempting to put together a family badminton game but could not locate a shuttlecock to play with. Rather than giving up, they decided to improvise by using a wiffle ball. After lowering the net and making paddles out of plywood, they had created something entirely new and exciting.

There is a common story that the game was named after Pritchard’s dog, Pickles, because the original wiffle ball belonged to the dog. The name actually came from Joan Pritchard, who said that the game reminded her of “the pickle boat,” which is a crew term for the boat that contained the oarsmen that were leftover from other boats. As it turns out, the family dog was actually named after the game, not the other way around.

Why is Pickleball Growing So Fast?

The game of pickleball is one of the fastest growing sports in the United States. It is becoming incredibly popular among adults because it provides active, but not exhausting exercise. Because pickleball courts are smaller than tennis courts and the ball travels slower, it is easier on muscles and joints while still providing a fun and challenging activity.

Because the rules and gameplay are actually quite simple, pickleball is easy to learn. Any combination of 2 or 4 players can pick up pickleball paddles and be playing a lively game right away. The ability to have a fantastic game with players of any skill level makes pickleball very appealing to people who have never played before, so don’t be shy next time you’re invited to play.

Pickleball enthusiasts living in Ormond Beach previously had to travel south to Daytona and beyond to play their beloved pickleball. But with pickleball being added to the lineup right here, local players are thrilled. It’s yet another reason to call Plantation Bay home!