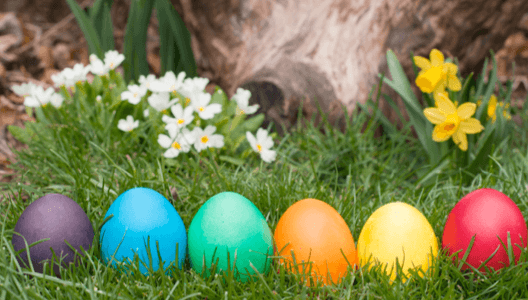 The Easter Bunny brings more than just hard-boiled eggs and candy to residents of Plantation Bay during the month of April.

With spring officially here, golf tournament season is coming down the home stretch with multiple events scheduled to close out the season, including the Mixed Club Championship, the Men’s Member Guest Golf Tournament, and the Children’s Museum Golf Classic.

The month of April will also be bringing us a new schedule of social events, a new lineup of Tuesday night dinner specials, and even a new weekly special at Club de Bonmont. Let’s take a closer look at some of the big things that are being planned at Plantation Bay for the month of April.

While spring is the beginning of the golf season in many parts of the country, it marks the end of the tournament season here at Plantation Bay. That means that April is going to be a busy month for tournaments and events.

Starting on Thursday, April 3 and running through Sunday, April 5, both Club de Bonmont and Prestwick will be hosting the Men’s Member Guest Golf Tournament. This event will start off with a Skills Challenge on April 3, which will be followed by a Player’s Party. Then, on Friday and Saturday, two-man teams comprised of one member and one guest will compete in head-to-head match play. The event will be capped off with an Awards Gala featuring dinner and dancing on Sunday evening.

The following weekend will be the Mixed Club Championship. This event marks the end of the 2013-2014 Plantation Bay Golf Season. The tournament will take place on Friday, April 11 and Saturday, April 12 on the Prestwick and Club de Bonmont courses. Teams can register for the event at either of the golf shops.

Another fun event scheduled for the month of April is going to be the Children’s Museum Golf Classic. This four-player scramble will start with registration at 9:00 am and then a shotgun start at 10:30 am on Monday, April 7. There will also be a $10,000 Hole In One Contest! Entries are due by April 1, and all proceeds will benefit the Charles and Linda Williams Children’s Museum.

The first big social event scheduled for April will be the Music in the Park event on Sunday, April 6. This event will feature live music performed by our very own Plantation Bay residents. There will also be refreshments, as well as art, crafts, and photography booths exhibiting the work of Plantation Bay residents. Anyone looking to showcase their own work at this event is encouraged to contact Lisa Egle at 386-236-4273.

On Saturday, April 12, Club de Bonmont will be hosting Malt Shoppe Memories from 6:00 pm to 10:00 pm. Guests will be served a plated dinner, and treated to live entertainment by The Malt Shoppe Memories. Guests are encouraged to dress in their best 50’s and 60’s clothes!

Club de Bonmont will also be hosting another edition of Thursday Karaoke with DJ Mondo on April 17. Guests will be able to order from the A La Carte menu. Reservations and proper dinner attire will be required.

One of the biggest events for the month of April is going to be the Easter Brunch held at Club de Bonmont on Sunday, April 20. Reservations will be available between 11:00 am and 2:00 pm. The buffet menu will feature an omelet station, a carving station, roasted salmon, sautéed chicken Romano, and plenty of sides and desserts. Reservations and proper club attire will be required.

In addition to all of these great events, Club de Bonmont is also introducing a new weekly special called Deck Dining on Wednesday afternoons. Members are encouraged to make reservations to have lunch on the club’s back deck.

Between the golf tournaments and the social events, April is going to be a busy month for Plantation Bay members. Make sure you mark your calendar for the events you want to attend, because this busy month is going to fly right by us!