It is one of the most popular recreational sports going, and accessible for all ages, abilities and skill levels. Are we talking checkers? No! How about pickleball — that condensed version of several sports played on a court with a net? 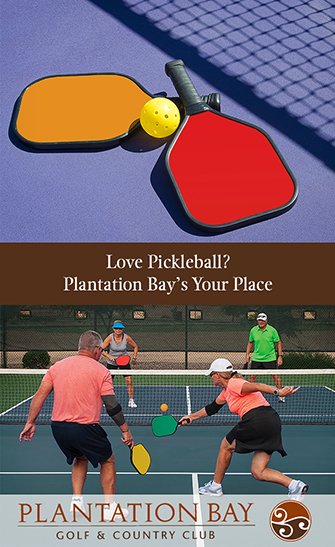 It’s a mashup of tennis, badminton and table tennis, and although it’s been around since 1965, pickleball’s appeal has soared in recent years.

We have the perfect place to play it, especially if you’re searching for a new custom Florida home. Plantation Bay Golf & Country Club, located near Ormond Beach in east central Florida, is one of ICI Homes’ signature properties. It also boasts a popular pickleball following, among other amazing amenities, and we’d like to introduce you to the sport, or entice you with the Plantation Bay pickleball scene if you’re already a player.

Here’s more on why Plantation Bay’s your place for pickleball.

It was founded almost six decades ago by several Bainbridge Island, Washington families seeking to improvise some lawn-game fun with incomplete badminton equipment. They cobbled together a badminton net, whiffle balls, and pieces of plywood for paddles one summer afternoon, ultimately creating one of today’s most popular recreational sports — completely on the fly!

Like table tennis and badminton, pickleball courts are smaller than tennis courts, so there’s not as much ground to cover. Their size also allows for more courts in a specific space. 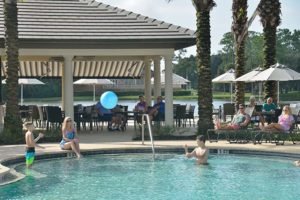 Plantation Bay’s pickleball scene is active and popular. It’s a great way to exercise and meet new neighbors. Beginners can attend sessions to learn how to play, and there’s often friendly tournaments followed by socializing at the cabana bar.

Nearby are courts for basketball, bocce and tennis if you love those sports or want to try them. There are two courts each for bocce and basketball, plus 10 Har-Tru tennis courts.