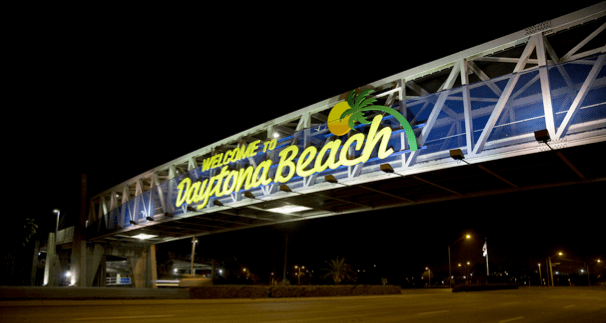 One of the greatest things about living in Plantation Bay is that its close enough to the action in Daytona if thats where you want to be, but far enough away so that you can avoid dealing with it if you don’t.

During few times of the year will that be more apparent than this week, Daytona Speedweeks 2014.

If you’re a race fan like me, you’re loving life. Even though its just the start of the NASCAR season it feels like the Super Bowl.

But if you’re not a race fan, you’re just wondering when the heck everyone is going to pack up and leave and let your life get back to normal.

No matter which camp you’re in, I hope the information below will help make your life a little easier this week.

Despite the fact that there are a few hundred thousand additional people in town this week, with no major events going on Monday through Wednesday at the track, things shouldn’t be too bad.

You’ll probably want to avoid most of the major chain restaurants in the vicinity of the speedway all week, but traffic-wise things shouldn’t be too congested early in the week.

The Thursday before the Daytona 500 has always meant gridlock in the areas around the track, as the Budweiser Duel, the two qualifying races for the 500 took place in the early afternoon.

But this year, for the first time ever, the Duel moves to primetime under the lights beginning at 7 p.m., which should mean less headaches for those who work or play in the vicinity.

Just make sure you’re out of the area as early as possible. The races don’t start until 7 p.m. but you know people will be heading there to tailgate hours beforehand.

Friday should be similar to Thursday, with the NASCAR Camping World Truck Series NextEra Energy Resources 250 taking place at 7:30 p.m.

Again you’ll have thousands of people going to the track early to tailgate and many weekend spectators will just be arriving in town for the weekend after checking out of work, so again, use common sense as it relates to driving in the vicinity of the speedway.

On Saturday the NASCAR Nationwide Series DRIVE4COPD 300 will take place at 1:15 p.m.

This day is pretty much shot if you just wanted to hit the mall or get some other shopping done.

Avoid International Speedway Boulevard at all costs, unless of course you’re going to the race.

Sunday will be just like Saturday, only magnified 5x. The official start time for the Daytona 500 is 1p.m., but there will be events going on all morning.

If you’re headed to the race, leave early to ensure you get a good parking spot.

Not going to the big race? Play a round of golf or maybe some tennis, grab lunch at the club, and most of all be thankful that you live in such a relaxing community.

In addition to the suggestions above, an ounce of common sense will go a long way towards keeping you sane this week.

Also, the Daytona Beach Police Department has a great Public Service Announcement available which includes traffic advisories for before and after each race event. It could come in handy if your plans involve being around the track this week.