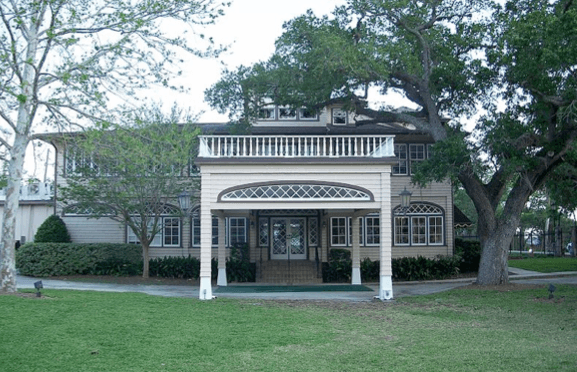 Here at home in Ormond Beach, we are completely surrounded by opportunities to explore a wide variety of historic and cultural attractions. It’s important that we remember to take the time to appreciate the beauty that is available for us to see, right here in our own backyards.

One of those beautiful historic attractions is The Casements, which currently functions as the Cultural Center for the City of Ormond Beach, and is located less than 20 minutes from Plantation Bay. The Casements is a spectacular Florida mansion that was once the home of John D. Rockefeller. It got its name from the large hand-cut casement windows throughout the mansion.

History of The Casements

Known as ”The Jewel of Ormond Beach,” The Casements was constructed in the early 1900s, and was then purchased by John D. Rockefeller in 1918. Rockefeller spent the rest of his life living in the house during the winter months of the year. He was an active member of the Ormond Beach community for the entire time that he lived here. One of the most popular traditions that Rockefeller started was hosting an annual Christmas party at the home, which is a tradition that continues to this day at The Casements.

After Rockefeller’s death, the building changed hands multiple times. One of the most notable functions that it had was as The Fairmont Casements Preparatory School. After that, the building sat vacant for many years and began to deteriorate. In 1973, the property was purchased by the City of Ormond Beach and the city spent the net six years renovating and restoring the building.

Today, The Casements is an historic landmark that serves as a focal point of the Ormond Beach community. It hosts a number of classes and workshops, and is also available to rent for special events.

The third floor of the building contains two permanent museum exhibits. One of the exhibits is The Boy Scout Historical Exhibit, which contains an enormous amount of memorabilia about the history of scouting. The other exhibit is The Hungarian Folk Exhibit, which displays a vast collection of folk art.

Another popular attraction at The Casements is known as Rockefeller Gardens. This refers to the beautifully manicured grounds that make up the nine acres surrounding The Casements. The gardens were originally the work of a Swedish landscape designer hired by Rockefeller, but extensive renovations were made to the gardens in 2009.

The Rockefeller Gardens are an absolutely stunning sight today. They include a promenade along the river and an outdoor stage that can be used for weddings. There are also free movies shown on the outdoor stage on the first Friday of every month, and there is a regular farmer’s market in the gardens as well!

Getting To The Casements

Getting to The Casements is a very easy drive for anyone coming from Plantation Bay. All you have to do is follow I-95 south, then exit onto US-1 towards Ormond Beach. Take that to Granada, turn left, go over the bridge and then turn right on Riverside Drive. Can’t miss it. The entire trip is only 12 miles and shouldn’t take you more than 20 minutes.

There are free tours of The Casements available to visitors between 10 am and 3:30 pm every Monday through Friday, and from 10 am to 11:30 am on Saturdays.

The Casements represents just one of the many possible interesting and historical day trips that are in the areas surrounding Plantation Bay. There really is no shortage of great activities here in central Florida!